React Native is a JavaScript framework for developing iOS and Android mobile apps. Facebook built the framework. React Native Development allows developers to create cross-platform apps in a single language (JavaScript) that operate on both iOS and Android devices and share features from both ecosystems. It was first launched in 2011 and has quickly gained popularity among developers.

React Native has a number of unique functionalities which are not available in other cross-platform programming tools. It is developer-friendly and delivers the greatest possible user experience. Hence React Native apps are a popular choice for mobile app development.

So let’s get started!

The hiring of React Native developer

To recruit the top React Native programmers, you must have a clear understanding of the expertise and required knowledge. You must know where to seek the top candidates and be able to offer reasonable pay packages. In the job description or letter of requirement. Describe the classifications of what you expect from candidates for each position. Finding experienced React Native developers must be simple. But finding the best would almost probably involve some research and dedication.

Below we have mentioned some important things to consider while hiring a React Native developer.

JavaScript is at the core of React Native, and is, in fact, at the heart of cross-platform mobile app development. Since React Native is built on JavaScript. Developers must have a thorough understanding of this language. Developers should be familiar with JavaScript ES6 and later, as well as its features and upgrades.

To design UI components, create the full app logic and services. And evaluate their flow, any ideal React developer must know how to use JavaScript.

Virtual DOM, JSX, and module implementation are all aspects that native React app developers will need to be familiar with. These aspects improve the User-Interface (UI) and application performance.

Developers should be familiar with the fundamentals of React, such as customizing and handling the component’s props and state. Moreover, it is vital to check the developer’s comprehension of these terminologies before hiring them. As they will have access to information related to their job role.

The critical component for every mobile development cycle is writing clean and intelligible code. Hence, a skilled React Native developer should be able to write source code that is understandable and consistent. They should be fully aware of how different class codes interact with each other. Developers must attempt to incorporate consistent processes into their mobile applications, which can only be accomplished via functional codes.

Furthermore, monitoring and maintaining large-scale application changes are only possible if the React Native developer can create understandable code. If the source code is unclear, maintaining or improving the application becomes a challenge.

When hiring a React Native developer, mock tests can be conducted for junior. And middle-level developers to find out whether they can handle React Native-based fragments and events while writing code.

A React Native developer should be conversant with the framework’s numerous tools and technologies. Enzyme, Webpack, Sentry, ESLint, Redux, and Flux are some of the most popular.

State management frameworks such as Redux and MobX provide operational control over the application logic, ensuring that programs perform as expected. Performance testing and full-stack development can be sped up with tools like Enzyme, Hockeyapp, Bower, Gulp, and others.

When you hire a dedicated ReactJS developer, make sure he is familiar with Objective-C, Java, Swift, and Kotlin as React Native developers who have experience with these frameworks will have enough knowledge about the intricacies of different platforms. It will also assist them to successfully converting an existing Android or iOS app to React Native.

6. A Firm Grasp of How to Integrate With Third-party Services

It’s advantageous if a candidate is familiar with the integration capabilities. And APIs of third-party services. External API integration allows apps to enhance in terms of functionality, accessibility. And the deployment of speedy updates. You can also add the following hard skills to your list:

When hiring a React Native developer, create a checklist of preferred soft skills. They’re just as essential as hard skills. Your candidate must be a team player and have excellent communication abilities. It means he should provide accurate feedback, accept constructive criticism without drama. And maintain a pleasant and curious attitude. In a tense circumstance, observe his train of thought. Is he good at solving problems?

Depending on their level of seniority, the list of soft talents for your prospective applicant will also differ. For instance, Junior Developer – Curiosity and a desire to learn. Problem-solving, approachability. And a new strategy for middle-level developers. Accountability, strong leadership, and decision-making are the responsibilities of senior developers.

Finding a perfect match for your company’s culture is at the top of the priority list. It entails locating someone who shares your values and mindset. In the long run, cultural fit is more important than hard skills, aptitude, or experience. According to Breathe, an HR software business, the cultural fit has Key benefits of react js for front-end development as it has an impact on employee retention, involvement, achievement, productivity, cohesion, and communication. Working as a team can be a big challenge if the React Native developer does not fit in with your company culture.

Hire a response native production company that you believe is a suitable fit for your business. It might be difficult to find the proper React Native company with the required skills and capabilities. But it is not impossible. Furthermore, if you have a long-term project in mind, outsourcing React Native development companies are a good choice because they are suitable and cost-effective. 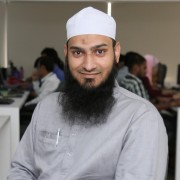 Patel Nasrullah Co-founder Peerbits, one of the leading Top mobile application development company USA, in 2011. He devotes his time in inspiring young leaders to take the leap of faith. With the experience of 10 years in Web and App development, he now gives full attention to the enterprise by offering mobility solutions about the strategic planning and execution.

What is SEO and How It Works for Small Businesses in 2021?

Need for healthcare software and its uses in the industry

What is the AWS Management Console?